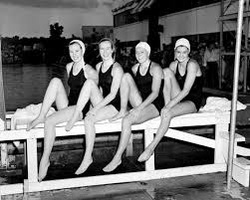 The History of the Mermaids

The Auburn Mermaids have a long history here in the California foothills. The team was established in 1968 and swam in the Sacramento Area Synchronized Swimming League.  During the 1970’s (lacking recorded history) the Mermaids joined VFCAL which consists of five teams including the Auburn Mermaids, Cordova Cordettes, Fulton-El Camino Stingrays, Roseville Aqua-bunnies and Sunrise Swans.  In 2005, the Davis Aquastarz joined VFCAL and sadly in 2008 the Roseville Aqua-bunnies retired their team. 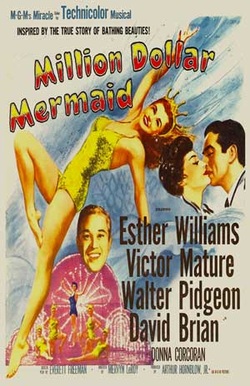 A Concise History of Synchronized Swimming

It seems ironic that a sport that doesn’t have a men’s category may have been invented by one of the founding fathers of the United States. Benjamin Franklin grew up in Boston, Massachusetts and spent much of his time swimming in the Atlantic Ocean and experimenting with exercise and its health benefits. On a trip to London in 1724, he performed maneuvers in the Thames River that he called “ornamental swimming” for the entertainment of observers.

Water Ballet Goes Global
The first water ballet competition on record was held in Berlin, Germany in 1891, before the sport was actually called “synchronized swimming.” It’s rumored that clubs designed to participate in and host these competitions began to pop-up simultaneously in Australia, the USA, Canada, and France.

But credit for inventing the modern sport of synchronized swimming is usually given to an Australian-born actor and swimmer named Annette Kellerman. Kellerman was a champion distance swimmer, diver, and practiced ballerina in the early 1900s. After making a name for herself in Australia, she moved to England where she impressed the world by swimming almost thirty miles down the Thames River.

A few years after her swim on the Thames, she received more media attention (and liberated female swimmers perhaps even more than any of her athletic feats), by wearing a one-piece swim suit that bared her arms and legs on a beach in Boston, Massachusetts. Then in 1907, Kellerman, in her still shocking one piece, performed underwater in a large glass tank at the New York Hippodrome. It became a landmark event for synchronized swimming and its quick rise in popularity.

During the next 30 years, countries began developing more and more synchronized clubs and college teams. One of the more famous venues was the University of Chicago’s water ballet club, started by Katherine Curtis. In 1934, sixty of Curtis’ Modern Mermaids swam in the lagoon at the Century of Progress World’s Fair in Chicago using what they called, “a combination of strokes, tricks and floating formations.” The act received rave reviews. The announcer at the event inadvertently named the sport when he called the performance “synchronized swimming.”

Aqua shows became a popular form of entertainment from that point on and kept synchronized swimming in the minds of the public. The most well-known performances were perhaps done by Billy Rose’s Aquacade Revue which featured Olympic swimmers-turned-actors Johnny Weissmuller and Eleanor Holm.

Synchro on The Silver Screen
When Hollywood discovered swimming champion and bathing beauty, Esther Williams, synchronized swimming also got its share of the spotlight. Williams was the 1939 U.S. swimming freestyle champion and Olympic contender and caught the eye of Billy Rose, whose Aquacade had gained such a following that it opened at a second venue in San Francisco. Williams filled the starring role as Aquabelle #1 and then went on to shine in many MGM American movie classics—the most popular of which was “Million Dollar Mermaid” in which she portrayed Annette Kellerman.

The water and swimming scenes in “Million Dollar Mermaid” and similar films often included elaborate sets, water slides, fountains, and stages that emerged from the pools and many more swimmers in the water at once than would be seen in a synchronized swimming competition today. It wasn’t unusual to see a man swimming alongside Williams either. In fact, in the youngest days of the sport, men swam synchronized too, until it became almost entirely a women’s sport soon after the water-themed movies.

Williams’ fame on the silver screen earned synchronized swimming a place in American pop culture in the 1940s and 50s.

Olympic Hopefuls
Competition within the United States started to heat up in the 1940s. The Amateur Athletic Union officially adopted synchronized swimming as a competitive sport including both the team and duet events, and by 1942, the first attempt at a National Championships was held. Only three clubs (all from Chicago) showed up.

The first solo event was added in 1950, and the first solo champions were named: June Taylor from Ontario, Canada won the Indoor event and Beulah Gundling from Cedar Rapids, Iowa won the outdoor title. The US National Championships were held twice each year, once at an indoor pool and once outdoors, every year until 1990 when it was combined into one regardless of the pool type.

Like so many sports, Synchronized Swimming set its sights on the Olympic Games. In order to be selected as an Olympic sport (before even being considered for a vote in), athletes must demonstrate at the Games. So, in 1952 the U.S. and Canadian teams performed at the Pan American Games in Buenos Aires, Argentina, and then again at the 1952 Olympics in Helsinki, Finland. At the 1955 Pan American Games in Mexico City, Mexico decided to include synchronized swimming as an official event, but the International Olympic Committee was not yet convinced.

The U.S. Team went on a world tour followed by yet another Olympic Games demonstration in Rome in 1960. Meanwhile, national competitions for age group and junior level competitors became more organized, officials worked on compiling rules and regulations, and the figure competition was added. Finally, after two decades of demonstrations and proving legitimacy, the International Olympic Committee accepted the duet event for the 1984 Olympics. And just three months before the Games, the International Olympic Committee accepted the solo event as well. Synchronized swimming had its Olympic debut in front of an American crowd at the XXIII Olympiad in Los Angeles. Tracie Ruiz and Candy Costie won the first Olympic duet gold medal, and Ruiz won the first Olympic solo event, coached by Charlotte Davis.

The Olympic events would later change, and in 1996 team synchronized swimming was the only event. Duet was added in the 2000 Sydney Olympics, and both team and duet are currently allowed in the Olympic Games.